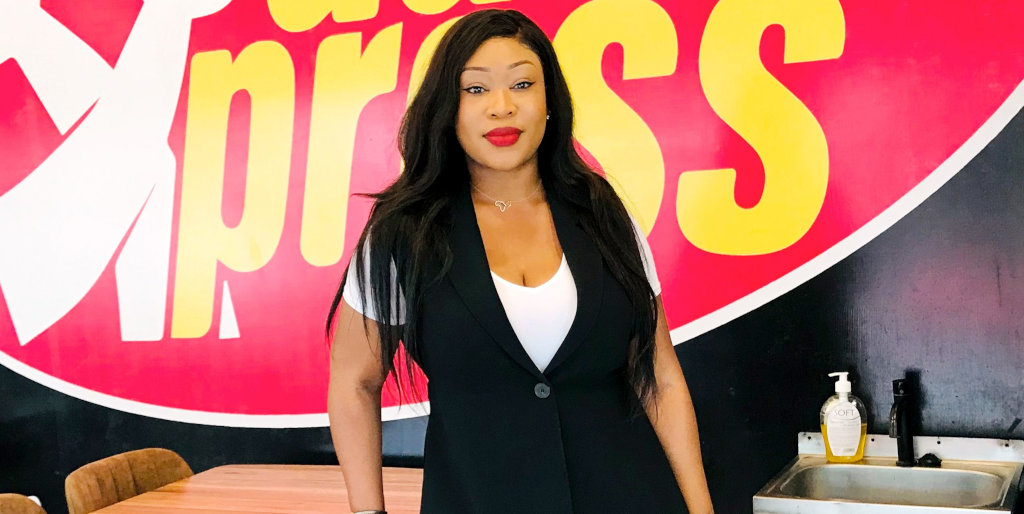 Olivia Akouba Angola, director of Dabali Xpress, at the chain’s outlet in Zone 4, a district of Abidjan.

There is a steady flow of people into a fast food joint in Abidjan’s Zone 4 neighborhood despite the hour – 11 a.m. – often a respite in the restaurant business when business dwindles between first coffee and breakfast customers and lunch time. crowds.

This is Dabali Xpress, which operates seven days a week, between 11 a.m. and 10 p.m., to welcome customers “to serve quickly and eat well” according to the company’s slogan, in a joint whose name means “fast food ” in Ivorian slang. .

On the menu at the outlet, which opened in September 2021, is diverse African cuisine, mainly from various regions of Côte d’Ivoire and more recently from the wider West African area. Meals are also accompanied by local desserts.

Among the first customers served that day was a table of four at the back of the fast food restaurant. They all work for a local company and have become regular customers of Dabali Xpresss.

“Before, it was a little difficult to eat there between noon and 2 p.m., because here in Zone 4, all the restaurants offer Western dishes. It is therefore a breath of fresh air for us to have this beautiful Dabali Xpress where you can be served in less than 10 minutes and enjoy your good palm seed soup,” said N’guessan Honoré, the one of four.

The brains behind this concept is Olivia Akouba Angola, 30, mother of two, who is co-owner with her husband, Daniel Aggré.

“The name Dabali Xpress came from brainstorming with my husband and we wanted the name to reflect the concept of fast food. We opted for “express”, which is a nouchi word, which in Ivorian slang means “fast food”. It captures the look of food being served quickly,” she explained.

Angola says it took her and her husband seven to eight years of brainstorming and assembling before finally, in September 2021, their idea came to fruition.

“This idea was born out of my husband’s experience as a student abroad where he had to work in fast food restaurants to pay his fees and bills. We said to ourselves ‘why not reproduce the system here in Côte d’Ivoire but with our local dishes?’ “, she says.

“It took longer because local African dishes take longer to prepare, but we were determined to do this by finding a formula to serve these dishes quickly.”

Angola, who returned from the United States in 2015, said that once the concept was adopted, it was easy for him to put his business skills, knowledge and experience to good use to make his plan a reality.

After the opening of the first point of sale, things went very quickly, because many people adopted it. This allowed them to open more outlets in Abidjan, bringing the total in the city to three.

In addition to Ivorian cuisine, Dabali Xpress now serves dishes from other countries in the West African sub-region, such as fried rice, “red-red” (a Ghanaian dish made from black-eyed peas and plantain ), and many other dishes, all with a price of around US$5.

On a good day, Angola said they are able to serve around 300 customers, both local and non-local, in their three outlets.

She added that they were keen to tap into the diversity of the clientele by offering dishes from other African countries because Abidjan is a city of all nationalities, including expats from the rest of the world, who are often eager to savor the African cuisine.

Although work starts early at Dabali Xpress, it opens for customers at 11am.

“Early in the morning, we start cooking the ingredients so that all the menus are ready by 11am. There are days like Saturday and Sunday when we have a lot of work, but we have everything we need at our disposal because our supply is well kept in a cold room and that makes our work easier,” Olivier said. Kouame, one of the chiefs. .

A year after its opening, Dabali Xpress received a rare visitor: the Ivorian Minister of Tourism and Leisure, Saindou Fofana.

Besides honor and approval, the minister had good news; he announced the selection of the channel as one of the chosen outlets to welcome guests and officials of the 2023 Africa Cup of Nations, which will be hosted by the country.

“It is a real pleasure to see that our government is on the dynamics of supporting local entrepreneurs and we are happy with this news while hoping that it will always be so,” she said.

To meet the growing demand for its food, Dabali Xpress has launched outdoor catering and delivery services, with customers able to order their food either on its website or by phone. Out-of-home catering now accounts for 30% of its daily sales.

The founders also installed technology to improve the outlet’s ability to serve “quickly and with great food,” in line with its motto. “When the customer arrives, there is the display that shows all the menus on offer, which makes it easier and faster for them to check and order. Once the order is ready, they are alerted by a beep telling them to choose their food,” Angola explained.

Dabali Xpress sources its supplies from local farmers and suppliers. “Our supply is done locally. It ranges from meat (beef and chicken) to fresh vegetables and cereals… everything is local,” Angola said.

“While we strive to excel and attract more customers, we are aware that we face fierce competition from global brands selling Western meals, a space they have occupied for a long time and established a following, especially among the urban elite,” Angola said.

The broader market, however, is there for the taking.

“We present these dishes that in the past were not necessarily presented in ideal sanitary conditions or in an environment that does not compete with other exotic restaurants. So we try to make sure non-locals can enjoy it too. Excellent ambience and hygiene are key elements in the food industry and at Dabali Xpress it is essential,” she said.

Angola is now planning to expand Dabali Xpress to several cities in Côte d’Ivoire, as well as further afield in Africa and even around the world.