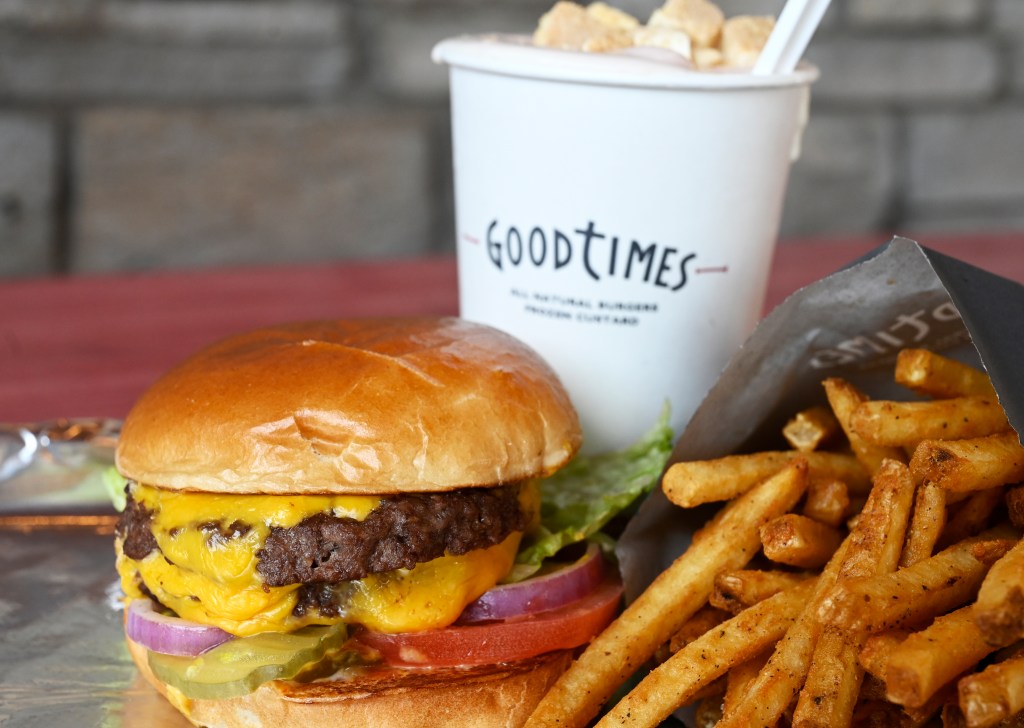 Where do you start when none of your words are good enough for Good Times? When there’s bambino burgers and frozen custard and wild fries on the line? When you dive into your little cardboard box of green chili cheese fries and get one that’s all covered in cheese and just the right amount of chili and all is well with the world and at your coffee table?

Yes, we now have In-N-Out, Shake Shack and Whataburger, but what about Good Times, headquartered in Golden? Why don’t we talk more about our local drive-thru hero and the quality of almost all of his gigantic menu?

I break the silence of Good Times. I’m shouting my love to him from the rooftops, because Good Times needs to know how much we love and appreciate him before it’s too late.

We are not worthy of you, Good Times. From your all-natural burgers and antibiotic-free chicken. (“At least something is drug-free here in Colorado,” says their cheekily brilliant ad campaign.) You care more about our health and well-being than we do, and how do we thank you? We park for two hours in an In-N-Out queue.

But Good Times is patient; Good Times is nice. It has nothing to envy; he does not boast. The good times never fail. Good Times forgives us of our transgressions and welcomes us with open arms and breakfast burritos. Because, yes, they do breakfast too!

I’m a cynical person who believes in almost nothing, and certainly not in humanity, but I do believe in these burgers and fries. I believe all potatoes should be covered in green chili and cheese and placed in a small cardboard box or at the very least coated in spices, crispy and served with a wild dippin sauce.

About those fries. Wild fries have been on the menu at Good Times since it opened in Boulder in 1987. (Hard-core fans will know that Good Times is a spinoff of Round the Corner, a sit-down burger joint where you’d call to place your order from the stands.) At some point, Good Times removed wild fries from its menu (they wanted to cut their own potatoes and keep things all natural). You can imagine how this go.

“There’s been such an upheaval in society that we’ve brought wild fries back,” said Amy Nedwell, chief marketing officer for Good Times. ” They revolted. More than anything else we’ve had on our menu and gotten rid of, there’s been an uprising about wild fries. So the wild fries came back.

Wild fries are essential to the survival of Good Times and ours, but there is also a time and a place for natural potatoes. That place is inside that cardboard box, topped with green chili and cheese, and that time is, in retrospect, forever.

Of Classes there’s green chili, because it’s Colorado and we love green chili. Remember Good Times’ foray into the Green Chile game started with Santiago’s? This was the case, in 2011, on fries and breakfast burritos, but it was a temporary partnership. Good Times wanted to carry on and Santiago didn’t so Good Times did something slightly treacherous and instead of using our Pueblo peppers went down to Hatch Valley New Mexico to get the peppers needed for their chilli.

“They didn’t have enough big growers who could continually sustain a restaurant,” Nedwell said of the Chilli Pueblo snub. “There was no capacity to do this, the farms were not connected to the food distributors. We ended up going to Hatch Valley.

These days, Good Times consumes 4,200 bushels of Hatch chiles a year, which actually seems low considering all the green cheese fries my family consumes. It’s worth noting that Good Times tries to be local in most areas – the all-natural meat comes from Meyer Natural in Loveland, they serve Daz Boggs coffee, and Aspen Bakery makes the bambino buns – but really all that concerns Good Times is worth noting.

Especially frozen custard. When Good Times introduced frozen ice cream to its menu in 2001, it was pretty new to Colorado. We had ice cream and froyo, sure, but Midwestern ice cream was still a rarity, and we can thank Good Times for granting us its thick, creamy goodness.

My beef with custard? Scary Blackberry from Oregon. Why am I so often limited to the confined flavor choices of vanilla and Oregon blackberry? Nedwell tells me that the reason we see Oregon Blackberry popping up on the custard menu three times a year — when we have to wait a full year for the other vastly superior flavors — is because you love them. It’s their bestseller, and since the restaurants are so small and there’s not enough room to produce multiple flavors, we get the creepy Blackberry from Oregon three times a year.

Frozen custard is perhaps the basis of Good Times’ most important menu item: the Pawbender. Made of custard, peanut butter and dog biscuits, Pawbenders are the best things to happen to our pooches since belly rubs. When it was time to say goodbye to my beloved evil pug, Smeagol, last fall, I turned to Good Times for its Pawbender send-up.

Come to think of it, I wouldn’t mind if my last meal came from Good Times. It would include the West Coast cheeseburger and its three slices of American cheese stuck to the glittery bun, those glorious green cheese fries, and frozen custard in just about any form. (Except, big sigh, Oregon Blackberry.) I might throw in the chain’s top-selling Bambino burger for good measure.

Now, I don’t want to cause panic, but Nedwell tells me changes are afoot for Good Times. It’s considering a franchise outside of Colorado (there are currently two outposts in Wyoming that are co-branded with Taco John’s), and it’s also undergoing a renovation and rebranding. The first to be touched up is the restaurant at 120th Avenue and Colorado Boulevard in Thornton. The goal is to make drive-thru restaurants more seated-friendly, so they’re adding new awnings, patio tables and market lights. Each table will get a ring to hold the Pawbenders so they don’t smash through the floor when your own evil pug digs.

The Pawbender tables are fine, but the frankness worries me. Advertising from the early 2000s promised that Good Times was “going to be big,” but I don’t want them to be big. I want them to be exactly as they are, all wild fries and bambino glory. I’ll even spend three months on Oregon Blackberry if that means the rest of my order stays exactly the same.

Good time East Colorado, and Colorado needs its good times. Yes, In-N-Out may make our heads spin, but it’s Good Times that we come back to. Good Times that wakes us up in the morning and keeps us warm at night.

Please stay the same, Good Times. And don’t mess with our wild fries.

Subscribe to our new food newsletter, Stuffed, to get Denver food and drink news delivered straight to your inbox. 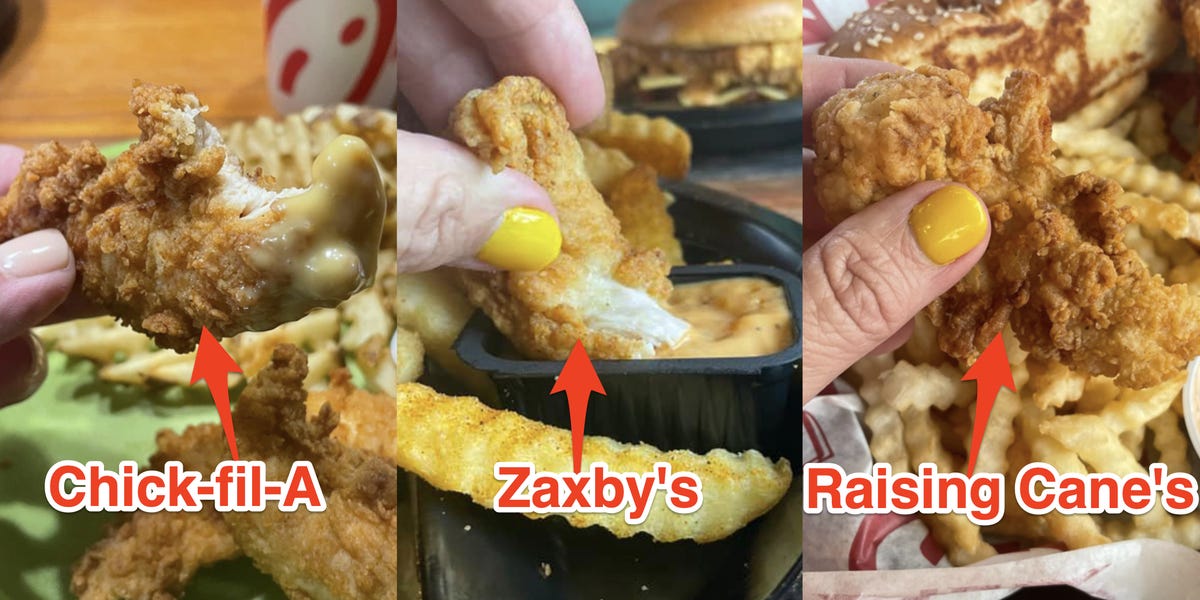