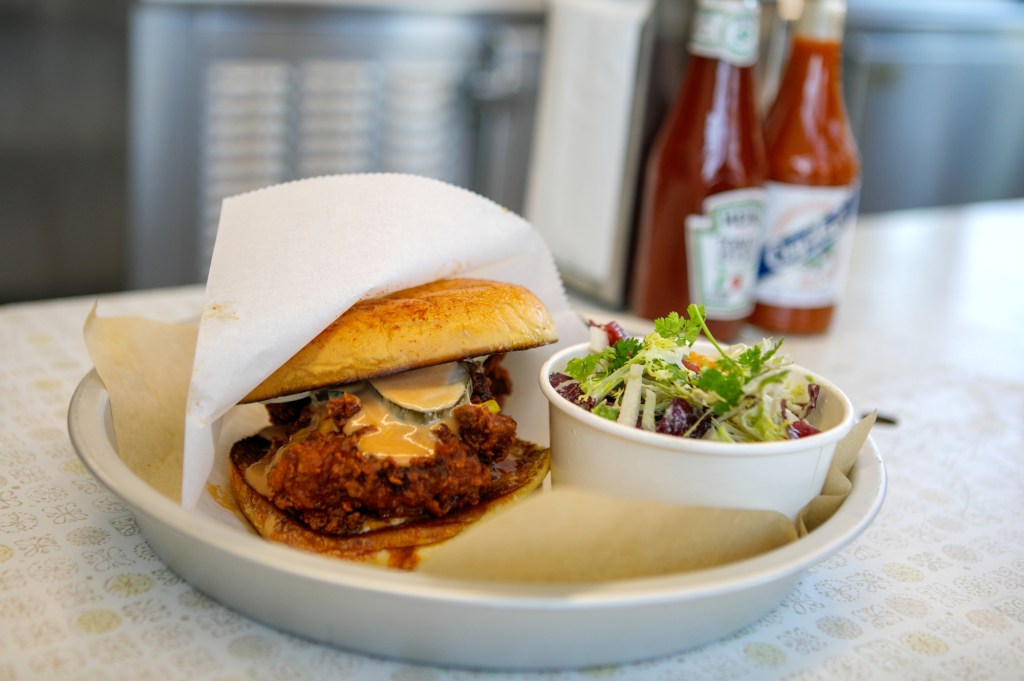 Nearly two years after Horn Barbecue’s Matt Horn announced plans to open a second restaurant inspired by the grand chicken shacks of the US South, the celebrity chef and pitmaster from West Oakland is about to unveil his birds. .

kowbird opens Jan. 14 at 1733 Peralta St., about half a mile from Horn Barbecue, with a menu including four generously sized fried chicken sandwiches, chicken with a puffed buckwheat waffle, wings and fries, sides and desserts prepared by the chef. The casual diner-style restaurant, located in the former excavations of Pretty Lady, will be open for lunch and dinner from 11 a.m. to 7 p.m. on Wednesdays and Thursdays and until 8 p.m. on Fridays and Saturdays.

Much of the old restaurant’s retro vibe has been preserved, from the 1940s U-shaped counter to the display case filled with key lime and sweet potato pies. A few modern touches, like pixelated murals of black Southern farmers, a tribute to Horn’s roots, decorate the walls.

Speaking to a small group of food writers on Wednesday, Horn said the Peralta Street location had a special meaning for him. He held his first pop-ups showcasing his California take on the Central Texas-style chest just a stone’s throw away.

“There’s so much history here in the community with this space that we wanted to pay homage to it with lots of design elements and just create a really unique place to be able to demonstrate our love of food,” said Horn.

Like several other Kowbird employees, Chef Adam Lawrence lives in the neighborhood. He talked about how important it was to have a successful restaurant on the corner of 18th and Peralta. “I’ve spent most of my life in this neighborhood, so it’s really great for me to be able to feed people here,” Lawrence said.

Unsurprisingly, the Hot Bird, a fried chicken sandwich topped with dried chilies and sweet pickles and served on a fermented chili-dusted potato bun, is already becoming a menu staple. Other fried chicken sandwiches are the Original Southern Bird, served with pickles and a tangy “bird sauce”; the Honey Bird, finished with a honey and pickled mustard seed sauce and the Early Bird, which is topped with a Southern-style sauce and a fried egg. The sandwiches are $12 each.

Vegans, you belong here too. Horn’s Not A Bird ($12) is a well-seasoned fried oyster mushroom topped with cucumbers, bean aioli and carrot salad, served on the same large potato bun. Drinks on tap include root beer and cream soda. Our favorite drink was a mix of sweet tea and homemade lemonade from Kowbird.

Matt Horn rose to national fame for his smoked meat pop-ups, which led to the opening of Horn Barbecue in October 2020 and numerous accolades. In 2021, Horn was named one of America’s Top New Food & Wine Chefs. His third restaurant, a burger joint called Matty’s Old Fashioned, is set to open this year. Horn’s first cookbook, “Horn Barbecue: Recipes and Techniques from a Barbecue Master,” will be released this spring. For more information, visit www.kowbird.com.

For more food and drink
follow us on Flipboard.