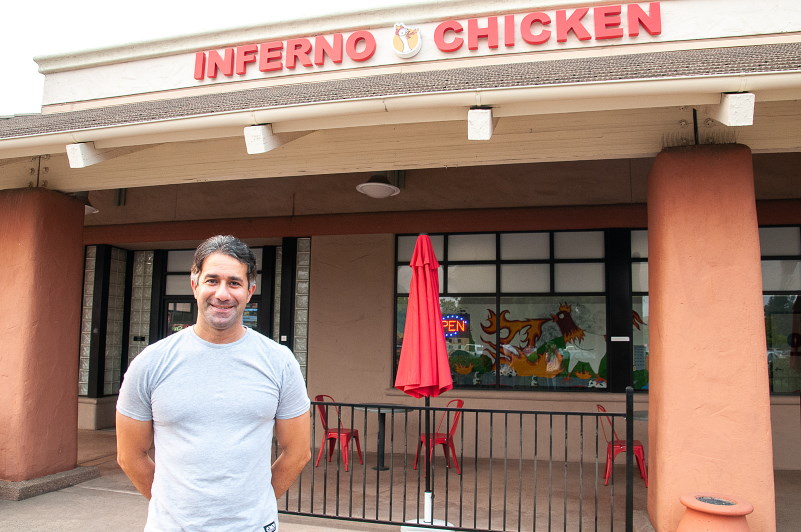 By Mike Hazlip—
Those familiar with the Armenian Grill House in the Birdcage Mall near Target may have noticed that a new restaurant is now open for business at the location.

Although the signage, brand and menu have changed, Inferno Chicken is owned by the same restaurateur, Naz Salmanyan. Salmanyan says he’s restructuring for a younger population.

With a menu that included lamb and other types of grilled meats, the Armenian Grill House was becoming expensive to maintain in the area, according to Salmanyan. The decline in business at Sunrise Mall is just one factor, according to Salmanyan, who prompted the transition to a restaurant model with less overhead.

“Due to the Sunrise Mall situation, the rising rents, the rising food prices, it forced us to make a decision,” Salmanyan told The Sentinel in an interview Wednesday.

That decision was to close the grill and reopen as Inferno Chicken. Salmanyan says he still hopes he can reopen the Armenian Grill House in another location. The grill house has received over 300 reviews on Yelp, with an average of 4.5 out of 5 stars since opening in 2017.

Inferno Chicken offers boneless wings and fillets in seven spiciness levels, with “South” being the starting point. The hottest flavor is ‘Hot as Hell’ and at 2,400,000 Scoville Heating Units, roughly equivalent to most law enforcement pepper sprays, Salmanyan requires customers to sign a waiver before consuming it.

For those hesitant to sign the waiver, the next hottest is the “Make Me Cry” at over one million Scoville units. Eventually, Salmanyan says he plans to hold contests at the restaurant.

The Sunrise Marketplace Business Improvement District has helped Salmanyan navigate the pandemic with signage and an iron fence that surrounds an outdoor patio for dining.

“They are amazing,” said Salmanyan. “From day one, I recommend any local business to really contact them if they need help. If they weren’t there, I don’t know if I would make it or not.

Commenting on the upcoming Raising Cane chicken franchise being built nearby, he said he doesn’t see the $ 1.5 billion restaurant chain as competition, but rather as a way to offer customers more. options for dining out.

“I am delighted that they are here,” said Salmanyan. “I really don’t care if they’re next to me or if they’re above me. The food courts are always amazing.

Noting other regional food courts, he said having multiple restaurants in one location increases traffic for all businesses.

Although he cited the declining Sunrise Mall as a factor in the decision to close the Armenian Grill House, Salmanyan hopes the future redevelopment will bring new life to the area.

“I don’t want Citrus Heights to be just a drive-through town,” he says. “I want those golden years to come back, where the next ones were was a hot spot. If we could stick to the roots, I’m telling you people will come back.

Inferno Chicken is located at 5925 Birdcage Center Ln, Suite 109. It is currently open Monday through Thursday, 11 am to 9 pm and 11 am to 10 pm on Fridays and Saturdays. It is closed on Sundays.