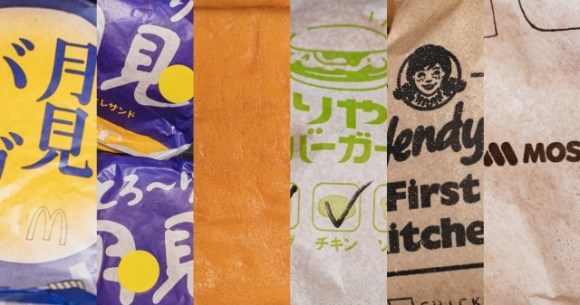 Wendy’s, Mos Burger, Lotteria, KFC and McDonald’s are giving us a taste of the moon this fall!

We used to stock up on ALL the burgers from McDonald’s and KFC, and now we’re back with even more deals, this time from competing chains. Wendy’s, Lotteryand Mos burger.

So it’s time to undo the button on the top of our pants again to make room for all the burgers, but let’s recap first with a quick look at what McDonald’s and KFC have to offer this year.

▼ A fried egg to look like the moon, with a sweet and tasty sukiyaki sauce.

▼ At KFC, there are four Tsukimi burgers on the menu, pairing fried eggs with chicken tenderloins or Japanese-style chicken cutlets.

For us, the winner is the Melty Tsukimi Japanese Chicken Cutlet Sandwich (460 yen), which won us over with its delicious Japanese-style katsu chicken fillet and runny fried egg center.

A surprise addition to the world of moon-gazing burgers this year came from local cafe chain Komeda.

▼ Called the “Full Moon Burger”, and priced at 720-790 yen depending on location, it was the biggest of the bunch.

However, among Komeda, KFC and McDonald’s, the ultimate winner for us was McDonald’s Sukiyaki Tsukimi Burger. We’re not done with the taste test, so let’s check out the new contenders, starting with the Torori Hanjuku Tsukimi Collection by Lotteria.

▼ There are six moon view burgers on the Lotteria menu.

Of the six burgers, three are new this year, so those are the ones we decided to try.

“Torori” translates to “Melty” while “hanjuku” describes an egg that is only half-cooked, resulting in a soft, gooey yolk. The sweet and savory teriyaki sauce was fantastic in all of this, but our favorite was the Chicken teriyaki.

Lotteria’s Teriyaki Rice Burger was a little disappointing as it seemed to be below the quality other chains were used to. Since these burgers had chicken in them, the closest thing we could compare them to was KFC Tsukimi burgers, but we have to say they weren’t as good as KFC’s.

Then up to the tasting plate, we have the two burgers with a view of the moon from Wendy’s: the Tsukimi BBP Burger (790 yen) and the Tsukimi BBP Chicken Burger (690 yen).

These burgers stand out from the competition with firm egg yolks, as well as two slices of crispy bacon and two hash browns.

▼ It was a big burger, with the moon barely visible under the beef patty, cheese and hash browns.

Unlike the other burgers, which tasted very Japanese, these burgers displayed bold American flavors, with a smoky BBQ sauce soaking up all the ingredients. It was the wildest burger ever, straying from convention but delivering delicious flavors, and on par with McDonald’s and KFC in quality.

▼ Now all we can see when we look at Wendy’s logo, other than the word “mom” hidden in her collar, is a full moon around her head.

And now for the last burger in today’s lineup – the Focaccia Tsukimi of Mos burger (520 yen).

This one is very special because the promo was made in collaboration with Sailor Moon. Will anime magic make this one any different? Well, for starters, it looks different from all the others because it uses focaccia bread instead of hamburger buns or rice.

▼ This one has a deliciously runny egg inside.

The star of the show here, however, is the sausage, which makes it taste completely different from all the other burgers we’ve tried this year. It was plump and delicious, and paired perfectly with the sweet sauce, making it one of our favorites this season.

So with our stomachs now swollen from trying moon sighting burgers from a total of six different companies in Japan, it must be said that they are all really good. You won’t be disappointed with any of these deals, but if you want to aim for the moon, you better try the ones from McDonald’s, KFC, Wendy’s and Mos Burger.

And if you have room in your belly for more moon-viewing items, McDonald’s has candy and sides for you, too!

Photos ©SoraNews24
● Want to be up to date with the latest articles from SoraNews24 as soon as they are published? Follow us on Facebook and Twitter!
[ Read in Japanese ]